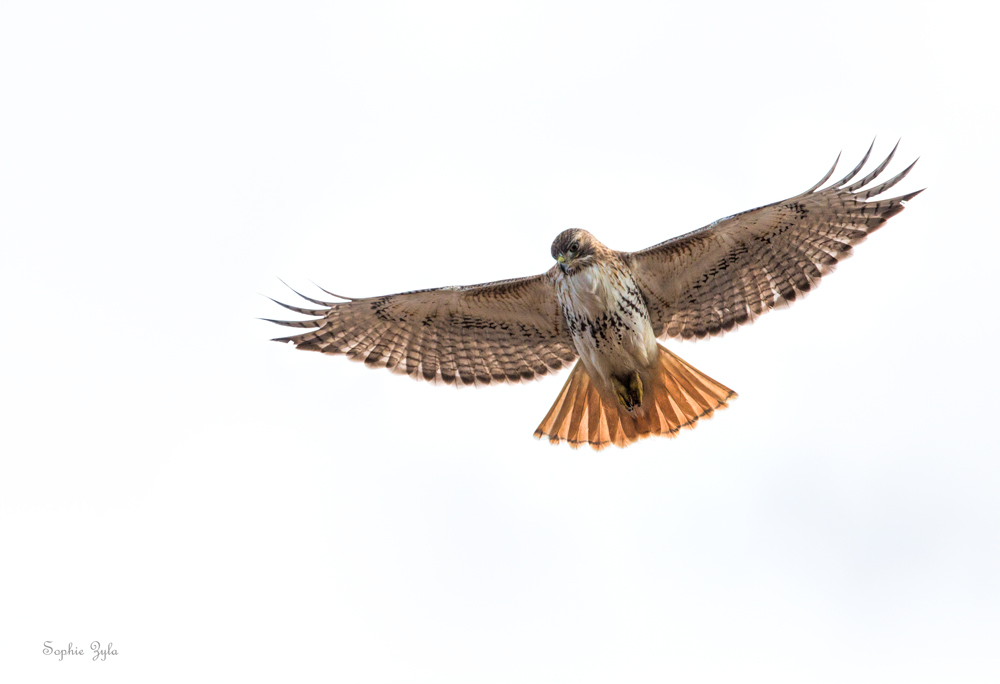 New Year’s Day 2020 I packed all my assorted camera gear into the car and headed to Rhode Island. I’d made a quick stop at Beavertail State Park but the winds were stiff and the Harlequins, scoters, and eiders were few and far off-shore. I headed to Sachusest National Wildlife Refuge and was not disappointed as the Red-tailed Hawk that had watched me walk past from a roof-top position suddenly took to the air to follow me. An awesome start to 2020! The lighting was not the best with many white clouds and small patches of bright sun, my camera set on some strange settings, and my decision to bring a 300mm 2.8 with a 2x extender for handholding ocean bird shots. I have to thank the winds as they helped keep this hawk afloat above me allowing me to photograph it without having too many tracking challenges.

I did manage to adjust my camera settings between a series of quick shots and lean my head back with a heavy camera and lens balanced and frozen between my arms. The winds were with me and the hawk enjoyed moments of simply being suspended in the air allowing me to capture images that may otherwise have been challenging! My position in the trail between the two foraging fields was perfect!

There must have been a successful catch as it was a few minutes before the hawk once again took flight. Too soon the hawk decided to fly to new areas that were out of range and sight. You will be my first of the year Red-tailed Hawk but not the last!

I made my way to the rocky ocean shore where I knew I should have at least some ocean birds to see if not photograph. There was a small group of scoters, scaups, eiders, and one stray Harlequin with this one Surf Scoter hanging around close enough for some nice viewing and photo opportunities. I made my way down the rocks as close as I dared to avoid scaring him off and getting a stray shower from the waves. What a ham he was! Preening and diving and playing in the waves. I spent some time enjoying his company before heading off as he drifted further away from the rocky shore. I was happy to see a group of folks had gathered on the trail directly overhead to enjoy his antics. I spent the day, except for a quick trip to Newport for lunch, but not a single Snowy or Short-eared Owl was to be seen. It had been my hope that at least one would be a welcome blessing after an awful 2019 and help kick-off an optimistic start to 2020. The Red-tailed Hawk seemed to be the one to come to share a message and show the way down a new path of many hopeful and exciting possibilities I’d been tossing around.