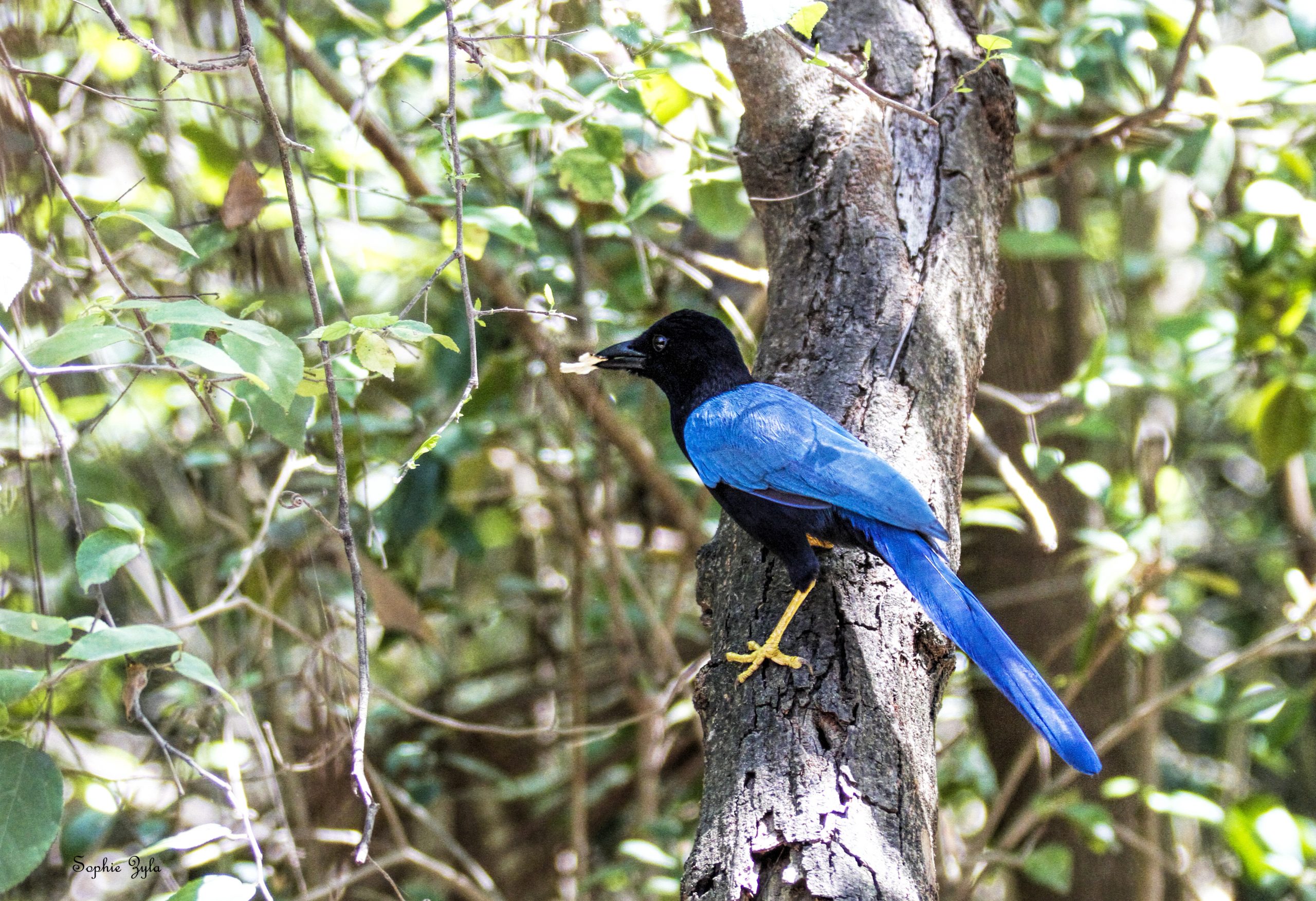 Seeing a 12” Yucatan Jay in the wild is amazing. Maybe because it is sporting my favorite color, blue, and it is such a contrast with the black body. These gorgeous birds were spotted in the forested area of the Yucatan Peninsula in Riviera Maya, Mexico. While males and females are similar, juveniles can be distinguished by the white on their heads and underparts and first-year birds have a yellow eye-ring and varying shades of yellow and dark on the bill. The eye-ring and bill are black by the third year. Yucatan Jay is found in deciduous forests, coastal scrub, or rainforest habitat. These jays are omnivores and eat a variety of seeds, plant materials, and insects. Predators include snakes and tree squirrels. To see them in the wild you will need to visit the Yucatan Peninsula, northern Guatemala, or northern Belize where it is a resident. There are no reported sightings anywhere else. I continue to be surprised by how little is really known about birds and how valuable research can be in so many areas. While there are no banding records for the Yucatan Jay, a Mexican Jay was banded in Arizona in 1969 and recaptured and released back into in 1987 making it almost 18 years old at the time. There are no banding records for any of the parrot species but captive White-fronted Amazons range from 30-40 years. With Willow being at least 28 she actually does well for a little old Amazon Queen!

The world in which Willow lives is very different from the one she would have inhabited. Her bedroom is the dining room with early morning sun, a jungle gym, and a tabletop playscape – none of which interest her much. She does spend some time looking things over as she has her breakfast and seems to notice changes, even in the replacing of feather images with bird images. After her leisurely breakfast and, if she is willing, time spent in her playground, Willow heads to the sunny window in the living room that she shares with some orchids and the cats lounging or playing in the cat tower. Willow’s world would have been much warmer, lows of 68 to highs of 90, than what our winters are here in the northeast.

There is a space heater with a bowl of water and Star Anise to keep the air from being too dry and making her stuffy. Star Anise is a treat, not that Willow cares to nibble on one, and also benefits the respiratory system and arthritis. Willow also gets a morning spritz while in her sunny window with a stem of aloe in her water to also help with arthritis. During the day she often has some music playing. In the evening she gets moved over to the area of the TV where everyone, cats, dog, and people, seem to congregate on the sofa and chairs. Today we will introduce a Christmas Tree with a whole lot of lights. Should be interesting, or simply overwhelming? We shall see!

This continues to be a bit messy as I’ve not had a chance to really focus on an exact format or plan for where I want to take this series. Thank you for following along and meeting some of what may have been Willow’s ‘friends’ had she remained in the wilds of Mexico.