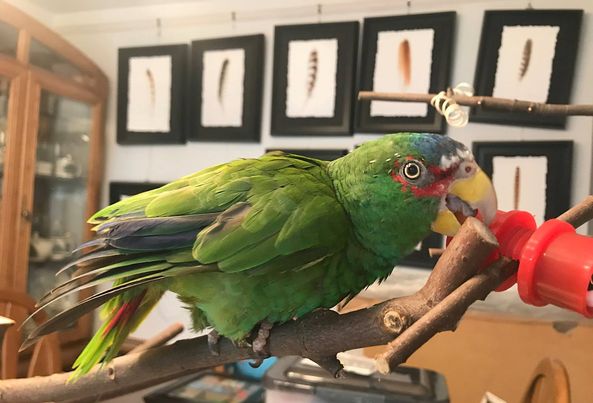 Willow is a White-fronted or Spectacled Amazon, Amazona albinfrons, from Central America but you may have opportunities to check her species off the list here in the United States. The only endemic species to the USA were the Carolina Parakeet, shootings made it globally extinct, and the Thick-billed Parrot, a Mexican species that extended into Arizona and New Mexico area was extirpated from the USA due mainly to shooting, logging, and development. The Green Parakeet and Red-crowned Amazon are possibly endemic as populations may have been and presently are found in southern Texas.

Parrots and parakeets are not migratory so the majority of them arrived with the commercialization of the pet trade during the 1960s and many managed to escape and became established in entry places such as Miami. Our desire to include exotic flowering and fruiting plants in our habitats and for agriculture allowed tropical species to survive when they discovered some of their preferred fruits, nuts, and vegetation. Captive birds have lost their species’ communications and flocking behavior that would normally help them survive in the wild. Chances are Willow would not survive even if released in Miami, Florida where four pairs of White-fronted Amazon’s had at least six successful fledglings in 2001 or areas of California or Texas where they have been sighted but not known to breed. Phrases I find so endearing such as “Thank you” and “Love you” or “Love you too” would simply not help her find friends to flock and roost with! Willow was imported into the US in 1992 and after 28 years of captivity has little agility or awareness of exactly how to move about the bars and perches of her cage. I continue to move her to the third level of perches from which, after some contemplation, she will find her to level two and ultimately level one. A snack bowl at level three is what entices her as she has no desire to explore otherwise. This 9-10” parrot has 6 bowls scattered on her three levels to keep her waddling across those perches regularly. My way to encourage this little senior to keep moving as she does need her exercise and a variety of perch dimensions for her arthritic feet!

As many of you know, the annual Christmas Bird Count (CBC) is underway! I will be out there on very early on Sunday with binoculars, a camera, and a notebook. Data from the CBC and ebird during the years of 2002 to 2016 indicated sightings of 56 species in 43 states with 25 species breeding in 23 states. There were 118,744 unique observations in 19,812 unique locations. Here in CT we have the Monk Parakeet that many like to see and others despise for the noise and large and heavy nests the colonies build. This brings up the complex discussion of introduced, invasive, and naturalized species and whether to manage them or not. There are many who hate European Starlings and House Sparrows that empty the feeders and kill some of our native breeding birds. During the 1970’s wildlife officials, fearing agricultural destruction reduced the Monk Parakeet population by half leaving them to continue to increase. The other commonly seen parrot in the US is the Red-crowned Amazon, a species that is on the IUCN Red List due to its decline in its native range and leading to possible endangered listing in the US.