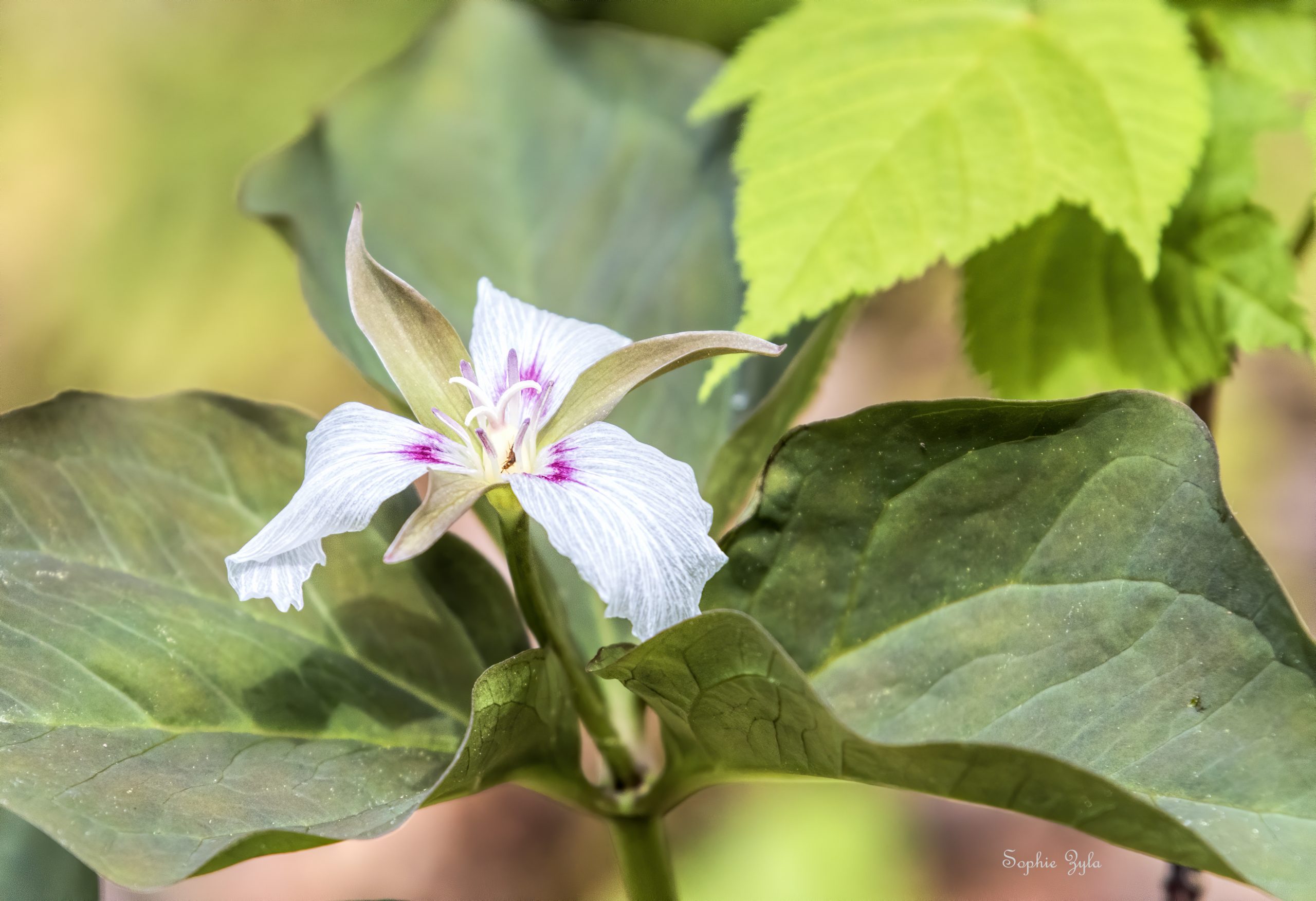 The Hewitt Pond trail in Minerva, NY leading out to Barnes Pond in Vanderwhacker Mountain Wild Forest is an old path found on maps dating back to 1901. The date for the stretch to Stony Pond is unknown. Not many visit this section of the forest as we saw no one during the 6 hours we were out. The 8-mile area we traveled is a very small part of the Vanderwhacker Mountain Wild Forest network of trails, lakes, and mountain peaks.

Don’t let that lovely boardwalk that Jeff and Zoe are walking ahead of me on fool you as it soon came to an end. The builders had a long way to go in replacing the moss-covered and rotted old logs that had once been a help for footing above the marshy 550-foot bog path.

When I hike, I like to photograph things as they are rather than capture a perfect specimen for a perfect image. I remember photographing a clump of plants once when someone I was with decided I had no idea how to take an image and began ripping the adjoining foliage out! Terrors!!! Like people, plants and wild ones exist as part of a community. In that community are so many close neighbors along with a mix of predators and prey.

Balsam fir, red spruce, Eastern Hemlock, sugar maple, yellow birch, northern red oak, American beech, eastern hemlock, hobblebush, striped maple, leatherleaf, Labrador tea, Blue-bead Lily, Pink Lady’s Slipper, Painted Trillium, Bunchberry, Starflower, Interrupted Ferns, wood ferns, and so much more was along our path! Even the isolated plant hides a thread of spider web or insect if we look close enough. Stop and smell the flowers and also take a closer look at what may be hiding. There were numerous beaver dams, some moose prints, a variety of birds, dragonflies, and swarms of mosquitoes if one dared stop for too long.

Painted Trillium bloom in May followed by a red berry fruit in early fall. Insects pollinate the plant while ants take the seeds to their nests where the plants later germinate. These trilliums are found along a number of the trails of the Adirondacks in beech-maple mesic forest and pine-northern hardwood forest.

Pink Lady’s Slipper, Cypripedium acaule, is an orchid that is loved by many. Often too many. Too often those who see them try to take a plant home not realizing that it is not legal nor worthwhile as they do not survive without its symbiotic relationship with the fungus that is found in the soil. The plant may live to be 20 years old and it takes many years for the seeds to produce the plants. Enjoy them in nature during their bloom as the bees do which are lured in for pollination.

Hobblebush is named for its pendulous branches’ ability to form obstacles to trip or hobble, those who wander past. The fruit of Hobblebush is a cluster of scarlet to deep purple berries from August through September. The fruit is edible, tasting a bit like raisins. Deer enjoy browsing on the twigs and leaves and birds and mammals enjoy the fruits. Hobblebush is found in the understory of a mesic beech-maple forest community along with Sugar Maple, Eastern Hemlock, Red Maple, and Yellow Birch. There may be an occasional nest of the Black-throated Blue Warbler found in the shrub.

Some of the members of the community, like lady’s-slippers, once removed will not survive as they require the fungus with which they exist in their natural habitat. Soil is a fascinating subject with a vast assortment of so much more than textures, moisture-holding capacity, and earthworms. There are multitudes of insects, bacteria, fungi, and many other microorganisms that make this a food web worth exploring! There is an amazing book by Jeff Lowenfels & Wayne Lewis called “Teaming With Microbes: The Organic Gardener’s Guide to the Soil Food Web” that is worth a read.

Yellow Birch, also known as curly or silver birch, had grown large in the moist and dense woodland. The trunks grew straight and tall in the canopy with Eastern Hemlock, Red Maple, Sugar Maple, and American Beech. Mature trees can grow 60 to 80 feet and have a diameter of 2 to 3 feet! Yellow Birch may reach 100 feet and have a 4 to 5-foot diameter making it the largest of the birches and the wood is also the hardest and most valuable of our birches. Many of the birch trees had bark that had peeled and turned thick and brownish-black with age. Yellow birch is a valuable resource as it is used in making furniture, flooring, paneling, plywood, broom handles, clothespins, popsicle sticks, toothpicks, and much more. For backpackers, yellow birch makes a good fire starter.

Bunchberry is flexible in growing requirements and is common in coniferous and mixed forests and some wetlands. The flowers produce clusters of red berries in July and August that are edible by people, bears, chipmunks, martens, rabbits, and hares, while deer and moose enjoy the foliage. Some of the birds that may eat the berries are Veeries, Ruffed Grouse, Philadelphia Vireos, Warbling Vireos, and White-throated Sparrows.

The mosquitoes were kind enough to leave us alone for a lunch and, on the return a snack and water break. The Tree Swallows, Cedar Waxwings, Red-winged Blackbirds, Common Grackles, Eastern Kingbirds, and White-breasted Nuthatch did their best to serenade and entertain. The area is reported to have an assortment of 147 species of birds breeding in the assorted habitats. It was nice to see signs of beavers in their lodges and freshly chewed trees as they are the best landscapers around! I’m sure our dog Zoe had a lot to do with our not seeing any of the moose, bear, dear, beavers, muskrat, river otter, fox, coyote, bobcat, raccoon, fisher, marten, mink, porcupine, and rabbits that may enjoying living in the woods and waters we passed through.

The Chalk-fronted Corporal is easy to recognize with the distinctive pale front thorax and abdomen base of older females and males. They were numerous but not willing to settle for too long for photos.

The Chalk-fronted Corporal is a large skimmer found that is numerous in the habitat of woods and waterways. They may be rather aggressive toward each other and defending their grounds and mates from other skimmers. There were many busy flying about but not too many that were willing to pause for long. Possibly our dog Zoe was a bit of a deterrent as were we.

Our Covid year gave many a reason to get outside and wander. Keep the trend going! There are many places to enjoy and much to be learned from simply taking a walk in the woods.